Whatever your position on the nature of 2020's "coronavirus scare," there's no doubt that it has significantly disrupted all of our lives over the last six months or so - and may continue to do so for some time to come.

I already knew in January that this year would challenge me simply because it would mark the end of my journey as a homeschool mom; I even wrote about my "year of lasts" in June 2019. But, of course, I had no idea that so many milestones and important family events would end up being lost entirely or manifesting so very differently than I'd originally anticipated - and I never imagined that so many things would be turned upside down, in large measure because of other people's reactions to a microscopic pathogen.

To be sure, our challenges haven't (thank God) been catastrophic; in fact, some (the homeschool spring formal and our graduation party in particular) may have turned out to be better than originally intended. But we have experienced real stress over the chaos of the last few months, and our lives going into this fall do look very different from what we'd envisioned at the beginning of 2020. So as I stand on the precipice of my first autumn as a "retired" homeschool mom, I thought it worth recounting what was supposed to have happened over the last several months versus what actually occurred instead.

The year was moving along pretty much as anticipated through January and February and into March. But then...

Rachel was supposed to play her 11-page Class A piano piece - which she'd begun practicing in August 2019 - at the district music festival on March 13. If she'd played well, she would have earned her first-ever berth at the state festival in May.


Instead, the festival was cancelled just hours before she was slated to play.


Rachel was supposed to continue taking on more and more shifts at her job as a YMCA lifeguard, both to earn and save money for college and to transition more and more into adult life.


Instead, she was furloughed starting on March 16, and has yet to be called back for a single shift even though the Y reopened in June. Rather than continue to wait around for shifts that might never come, she finally opted in July to open her own business - Girl Friday - through which she does various odd jobs (cleaning, babysitting, painting, cat-sitting, gardening, etc.) by request.


Rachel was supposed to continue tutoring through our city's literacy council, which she'd done since October 2018.


Instead, she hasn't seen her student since March and doesn't know if they will ever reconnect.


Rachel was supposed to play her Class A solo and one other piece at her senior piano recital in April.


Instead, her teacher was forced to postpone and eventually cancel the recital.


The girls were supposed to sing in their final homeschool choir concert at the end of April - a performance of pieces from Broadway's Anastasia in which Abbie had a featured role and Rachel would serve as one of the narrators.


Instead, the director was forced to postpone and eventually cancel the concert.


I was supposed to coordinate the 20th annual spring formal for our homeschool group in April. We expected 75 or more teens, which would have been the group's largest event of its kind.


Instead, I first had to postpone and then cancel entirely. A small group of 20 teens did participate in an alternate event at the end of May that turned out to be special in its own right, so my girls did at least get a senior prom of sorts.


I was supposed to coordinate the June 6 graduation ceremony for our homeschool group. Twenty-five teens from 23 families would have participated, making it the group's largest-ever ceremony.


Instead, circumstances led several families to drop out by early May, our original venue cancelled on us just a couple weeks before the ceremony date, and we scrambled to find a new location. The new venue had a much lower capacity so we had to limit attendance and lost a few more families in the process. We still had a beautiful ceremony - Abbie was part of the special music team, and Rachel finally got to play her solo as part of the ceremony's prelude music! - but we ended up with just 13 graduates representing 12 families. 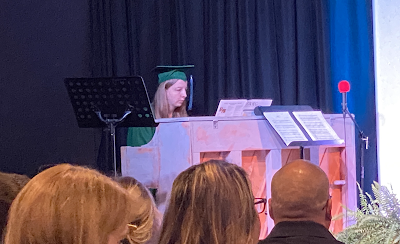 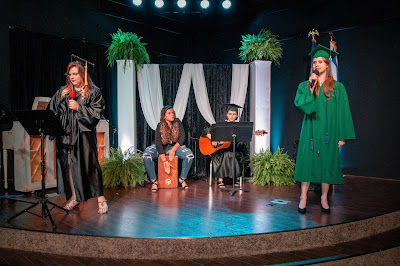 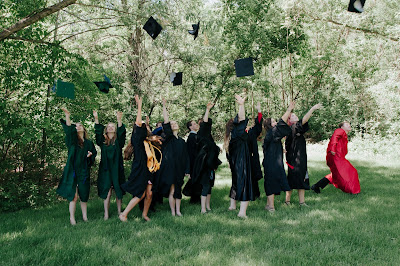 We were supposed to have our graduation party - a joint celebration with some dear friends whose daughter also graduated with our homeschool group - at our favorite park (where the girls played all the time when they were little) a few blocks from our home.


Instead, city policies made it impossible to hold the event as we'd envisioned it, so we moved the party - rather at the last minute - to our friends' family farm an hour from town. 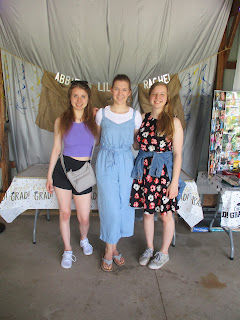 Abbie was supposed to be living at home after graduation, working and going to college while we planned her wedding for sometime in Spring 2021.


Instead - fueled at least in part by virus-related lockdown measures - Abbie and her love, Gabriel, chose to elope on May 13! She moved in with him on June 14, and we held a reception for them on July 18. I'm still adjusting to her not living here anymore. 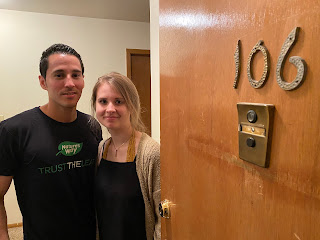 Rachel was supposed to volunteer at Lake Lundgren Bible Camp for several week-long camps throughout the summer.


Instead, LLBC first delayed the start of camp and then cancelled everything for the entire summer. Rachel did make a couple of day-trips to help out with maintenance work, but it was nothing like what she'd anticipated. 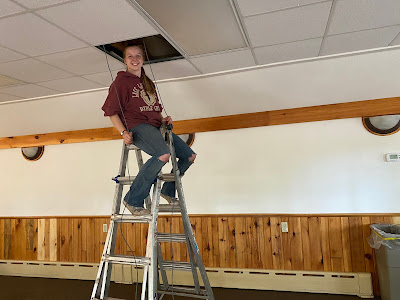 In mid-August, Abbie was supposed to start full-time in the Administrative Professional program at the local community college.


Instead, she changed jobs - taking a full-time assistant teacher position (which she loves) at a local Montessori preschool - a couple of weeks before the semester started, and decided to go part-time at the college. But then, less than two weeks into the semester, she chose to switch to the Early Childhood Education program, which necessitated dropping her Admin Prof classes and applying to the new program. Schedule-permitting, she may start part-time EC classes in January.


Our church was supposed to mark 50 years of ministry in September with a weekend-long celebration. Many with ties to the church over the years planned to travel from near and far to join us.


Instead, the event has been postponed until September 2021...so a 50th anniversary celebration has to wait for acknowledgement until the church's fifty-first year.


Rachel was supposed to leave today - August 29 - to begin her studies at a missions-oriented Bible college that she'd had in mind to attend for at least two years - as her first step toward serving in Japan.


Instead, the school's last-minute adoption of a draconian, inflexible mask policy led Rachel to drop out in protest less than two weeks before she was slated to begin. We're very proud of the stance she's taken even as we ache that her long-held plans have been unjustly upended. We're now helping her to recalibrate her thoughts and plans, which likely include ramping up her Girl Friday services, working and volunteering in other capacities, and (possibly) taking a class or two through the local community college.

Add to this what has been going on in my husband's life - he's been working from home, ensconced in his basement office since March 16, trying to be a corporate trainer via Zoom for a company with an international reach (and with no hope of returning to the office until "at least" January 2021); he's got a missions-mobilizing ministry but cannot actually mobilize any current missions teams; his ministry's annual fundraising golf outing was cancelled because of virus-related policies at the venue - and all I can really say is that this has been a lot to digest.

Though I've grown in flexibility over the years, the "Rou-Tina" part of my personality bristles over the fact that my routine has been out of whack for almost six months - with no end in sight. And my inner Momma Bear hates that the girls - especially Rachel - have lost so much that should have been normal in their senior year and launching into young adult life.

Of course, I do see that it's not all bad. I love my new son-in-law even though I didn't expect him to bear that title until next year; I know he's the man God has always destined for Abbie. I also believe that whatever God is doing in His redirection of Rachel's life right now, it will be good; she stood up to the college with godly motivation so He will bring beauty from what might seem like ashes at the moment. And I'm grateful that our lives have not been devastated by job loss and related problems that are hurting so many others.

So I'm not complaining even if it might seem that I am. It's just interesting thinking about the "supposed to" versus the "instead." I don't know how our current circumstances - in the lives of my family members or society at large - will play out going forward...or what lessons we're all supposed to (!) glean from this. Time will tell. In the meantime, I'm just really, really glad I know Jeremiah 29:11!


I know the plans I have for you, declares the LORD,
plans to prosper you and not to harm you, to give you a future and a hope.