Epistle of the Felines: Our 2020 Cat Saga

I recently wrote a post about how so many things that were supposed to happen a certain way over the past six months haven't panned out as expected. And now I've got another entry in the "supposed to...instead..." ledger - one that warrants its own post.

We were not supposed to get a new cat this year. We have four - two different sibling pairs - and, even though my husband and I have pinkie-sworn with each other that we'll always have cats, I was very content with that.

But fast forward to the end of June when this little guy showed up on our back deck one day - and didn't leave! 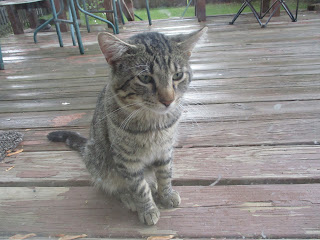 After several days - even though I wanted to resist - we felt compelled to put out some water...and then some food. He was very friendly, and our cats did not stress about him through the patio door, as they've done with strays in the past. We christened him "The Apawstle Pawl" (Pawl for short) since he was generally self-sufficient but was willing to accept gifts when offered.

After a couple of weeks - yes, we waited that long, assuming he'd eventually "go home" - we finally let him come into the house one day...and he promptly made himself at home. 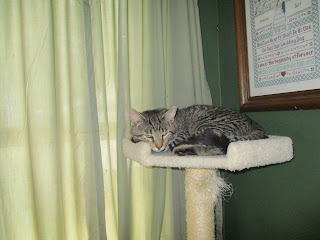 We were shocked that our cats were receptive to him - even the one who would be content as an only cat tolerated him - so we took that as a "sign" that we were supposed to add him to the pack. But we still let him outside when he "asked," and we were awakened in the middle of the night by a terrible cat fight the second day after he'd come in. And that morning Pawl was nowhere to be found; in fact, he stayed away for a full day.

Thankfully, he eventually returned and didn't look terribly beat up. But I determined right then that I'd convert him to indoor-only life for his own good. However, though he was as sweet as ever with us and still friendly with our cats, he began trying to mark his territory all over the house! He hadn't even hinted at that prior to the brawl with the other outdoor cat, so I surmised he might be trying to tell the other cat that our place was his territory.

I sympathized with his defensiveness, but couldn't tolerate spraying. So out on the deck he went again, and I tried a couple of times a day to bring him in to see if the spraying urge was only temporary. Unfortunately, it became clear that we couldn't trust him not to mark...but neither could I stand the thought of him living alone on our deck.

I did some asking around and found some friends-of-a-friend who could take Pawl. They live in the country about 30 minutes from here, so Pawl would remain an outdoor cat - but these new friends have about 10 other kitties and purpose to love them all very well. So I drove Pawlie out there at the end of July, and he has proceeded to adjust exceptionally well in short order. 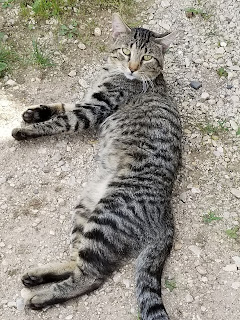 We missed him - he has a distinctive meow we'd become accustomed to hearing from the deck - but felt good about his new home. And we thought that was the end of that.

Once Pawl left, we noticed a young gray tomcat hanging around - in our neighbor's yard, though he wasn't theirs, and in our driveway. We figured he was probably the one with whom Pawl had had his tussle, and I was miffed at the little guy - cute as he was - because it was "his fault" that I'd had to surrender Pawlie. I determined that we'd shoo him away and hope he'd go away completely.

Of course, you can probably see where this is headed. By the end of August, he'd jumped the fence into our yard and managed to wheedle his way into Jeff's heart. In fact, Jeff took this picture one recent night when he (as has been his custom through much of this summer) was sleeping in a hammock in our yard. 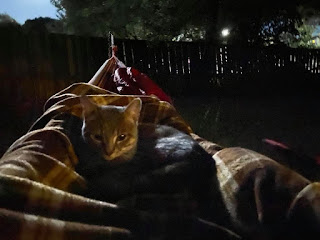 After that, the cat went from visiting the deck a couple times a day to claiming it for his own and doing everything in his power to win us all over. And...of course, win he sure did!

On September 2, Jeff snuck him some cut-up hot dogs. I didn't know that so, when he and Rachel were on a bike ride, I put out some soft cat food for him. Jeff laughed at me...until Rachel snitched about the hot dogs.

We then let him inside for several hours on September 3, and, despite the fact that they'd only seen him through the patio door for a few days, our cats were surprisingly chill. Two have been rather tentative and one - our lone ranger - has growled at him. But Prince - the one who also loved Pawl right away - has already taken to licking his head, and not one among the five has gotten aggressive.

And he hasn't sprayed! In fact, though I wasn't sure at first if he'd use a litter box - he seemed afraid of it that first day - he's been a perfect gentleman in regards to his bathroom habits.

We let him out at night on the third because we weren't sure if all the cats could handle him being in overnight. But I let him in again on the morning of September 4 - I felt so bad for him because it was so windy that day! - and he's been in  - happily and at peace with all the other cats - ever since. 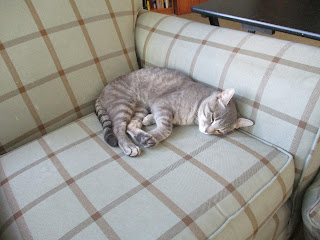 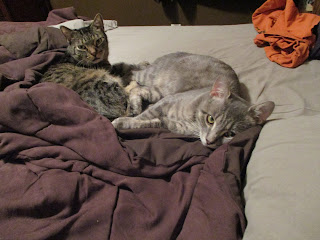 By the way, his name is Barnabas - named after The Apostle Paul's friend, the one with whom he did ministry for a time but from whom he eventually separated by mutual agreement. This seemed very fitting, given the circumstances - i.e., that kitty Barnabas and Pawl had apparently been relatively friendly with each other until their apparent late-night brawl, after which Pawl ended up "itinerating" out on the farm.

So...we were not supposed to get another cat this year. But then we were supposed to adopt Pawl. Instead, we found a more appropriate place for Pawl so that - unbeknownst to us at the time - Barnabas could adopt us a month later!

Of course, unlike so many of the "supposed to...instead..." moments of this year, this one at least - unexpected as it was - has a happy ending. 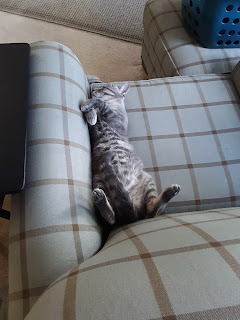 Ironically, we think both Pawl and Barnabas are about six months old (Rachel even wonders if they're biological brothers), which would put their birthdays at right around the time this whole pandemic business gained traction. So maybe, just maybe - now that they're both safe and loved instead of fending for themselves - might all the craziness of 2020 stop?

Yeah, I don't think so either. But at least we've done right by not one but two cute little kitties. And, thankfully, there aren't any other strays milling around our property!
*****
ADDENDUM - October 25:
There was another cat milling around, though she initially stayed under the neighbor's porch and skittered away whenever she saw any of us. However, she worked up her courage around the middle of the month and started visiting our deck, checking out our cats, including Barnabas, through the patio door and crying - just like Pawl and Barnabas - for a bit of attention. We christened her Lydia (after the New Testament Lydia whom Paul and, presumably, Barnabas knew). Yet we knew we couldn't keep her - she's unspayed and Barnabas isn't neutered yet - even though we felt horrible at the thought of her being stuck out in the cold all alone. So we put out the call to our cat-loving friends, in search of a new home, and one of my homeschooling acquaintances and her husband said yes!
We brought Lydia inside this morning - to make sure she was here when her new owners came to get her. After eating a good breakfast and exploring a bit - during which we kept all the other cats upstairs - she happily claimed a little cushion we keep under our bed and literally slept all day, warm and content, except for the times we couldn't resist visiting her and playing. We're now convinced that Pawl, Barnabas, and Lydia are siblings who were dumped in our neighborhood in June - but continue to be amazed at how friendly and healthy they all are despite their circumstances. And Lydia most of all might have had reason to be semi-feral - but, just like her brothers, all she needed was security and love. 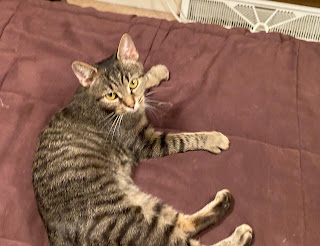 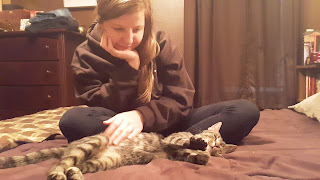 We sent her off to her new home this evening, where she'll live with a few other kitty companions and some dogs as well. Based on how quickly she adapted here today and early reports from her new owners, we're confident she'll adjust as readily as both Pawl and Barnabas have. And we're confident - for real this time - that we've seen the last of neighborhood strays this year!