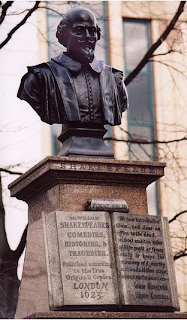 When I was in high school, I managed to avoiding reading anything by William Shakespeare. For some reason, the oft-obligatory reading of Romeo and Juliet didn't happen in my freshman English class, and sophomore English was a combination of "communications" and composition, devoid of any literature study. Then, as an upperclassman, I filled my schedule with advanced science classes appropriate for a wannabe veterinarian, and met my English requirements with more composition classes and a couple semesters of "theater arts."

And that was fine with me. You see, I'd naively latched onto the idea that Shakespeare was "really hard," and, as an insecure perfectionist, I didn't want to risk my GPA on the supposedly incomprehensible work of a dead British playwright. Give me, instead, the comparative safety of shark dissections, chemical equations, and essay writing!

In college, I rather quickly realized that life as a vet wouldn't be for me (thank you, Calculus 101, for so unapologetically pointing that out!) and then spent several semesters trying out a variety of academic majors. Ironically, I eventually landed in the humanities and found myself considering an English major. But Mr. Shakespeare's potential to tank my GPA still terrified me, so I avoided him by choosing a general "Humanistic Studies" degree instead of the more specific English major just so I could skip his eponymous class.

A few years after receiving my generic bachelor's, I returned to school to obtain a certification to teach English as a Second Language. I slugged my way through some hard-core linguistics classes, still believing Shakespeare would be harder, and eventually got a job teaching at a public/government middle school. A few years later, I transferred to the high school level, delighted to be assigned the upper-level ESL kids (i.e., those almost ready to "graduate" from the program into mainstream classes). But there was a catch: In order for the students to receive English, not merely elective, credit for the classes, the teacher had to be certified in Grades 6-12 English Language Arts in addition to ESL.

Given the option of taking additional coursework or being assigned to other classes, I headed back to the university. To obtain the certification I sought, I had to earn an English minor, which required - unsurprisingly - that terrifying Shakespeare course.

My perfectionism had abated a bit, but I still wanted to get "good grades" so I was nervous. However, my self-confidence had increased enough that I felt I could manage to earn the A I wanted if I just worked hard enough. Thus, I actually went into the class with curious anticipation.

And it didn't take me long to realize that, while reading Shakespeare certainly does require focus (and, in many instances, a good side-by-side modern "translation" to confirm the meaning of obscure phrases), it is well worth the effort and not nearly as difficult as I'd imagined. His use of metaphor! His understanding of human nature! His turn of a phrase...over and over again! In fact, I deem that Shakespeare class to be one of the best courses I've ever taken, simply because it afforded me the opportunity to "bathe" in the work of a master writer for 15 weeks.

Besides enthusiastically teaching both Romeo and Juliet and Julius Caesar to my students during my classroom tenure, I went on to jump at the chance to teach King Lear to middle school-aged students at a homeschool co-op. And when they were only nine and 10, I introduced my daughters to The Bard, starting with Bard of Avon by Diane Stanley and Peter Vennema, an excellent picture book biography, and then introducing them to Tales from Shakespeare by Marcia Williams and a picture book adaptation of Romeo and Juliet by Andrea Hopkins. And later - as we marked the 448th anniversary of Shakespeare's birth in 2012 - I read a prose narrative of Macbeth from Charles and Mary Lamb's Tales from Shakespeare, delighting as both girls hung on every word and immediately asked for another story from the book. I happily obliged, and urged them to read as many of Shakepeare's original texts as possible over the next few years (and to re-read them as adults).

My only regret about my "love affair" with Shakespeare is that it didn't begin sooner. But I've got plenty of time to make up for lost time. And, of course, I saved my copy of The Complete Works of William Shakespeare, so I've got everything he wrote right at my fingertips.