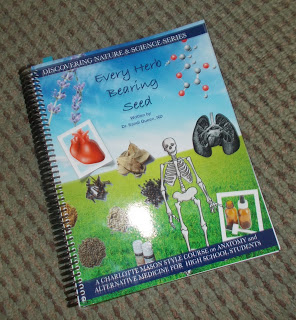 Not long ago, I saw yet again that "alternative" resources - along with trusting one's child, choosing to relax, and prayer - work...even for high school!

My very smart but "science-hating" younger daughter asked near the start of her high school years if she could take a hiatus from science. She is not a rebel, and - starting when she was just four years old - she has repeatedly demonstrated that she "knows" herself as a learner. She had thoroughly thought through her position and articulated it very clearly. So despite some trepidation on the part of my still-somewhat-school-indoctrinated brain - mostly because I wondered what others (even other homeschoolers) would think of me for daring (gasp!) to honor my child's wishes in terms of her education - I chose to listen and trust her, not knowing (gulp!) if or when she'd ever do more formal science.

And I started praying. Not asking God to change her mind and not from a place of anxiety - in fact, any time I felt anxiety rearing its very ugly head, I prayed for strength to smash it down! - but, rather, simply seeking guidance and direction about how best to proceed.

I did not begin frantically searching for science curriculum; God has done such good work with me in terms of freeing me from institutional-style thinking that I really did have peace about just trusting my girl. But a member of the Facebook group I moderate mentioned the science resources from Queen Homeschool Supplies. I'd used and enjoyed Queen in the past - for gentle language arts when my girls were young - but hadn't really considered it for anything else. Yet after looking through sample pages online, I felt led to order Every Herb Bearing Seed, a "course focusing on natural...medicine and anatomy."

Despite thinking it would be an enjoyable book, I actually thought my daughter would politely decline on principle - and I would have been okay with that. But, much to my surprise, her reaction was just the opposite. The book's emphasis on natural health piqued her interest, and then when she looked inside and saw the story-based lessons and research-oriented approach, her face actually lit up, and she said she'd be more than happy to give it a shot.

I still thought she might not like it much once she started. But she couldn't wait to tell me all about the first lesson and faithfully worked all the way through to the end. She also looked with interest at the other high school books on the site, quite open to considering them as well.

My purpose in sharing is not to promote Queen - though I have appreciated the company since we first used it for language arts. Rather, I was struck yet again by the beauty of giving my children choice and trusting each one's ability to know herself as a learner. I could have insisted my daughter do traditional science "like everyone else," dismissing her request for an indefinite hiatus as rebelliousness or the foolishness of youth. In fact, I could have forced both my girls to follow (sad) suit with so many other homeschoolers and insist we set aside the engaging, creative, holistic approach we'd employed when they were young in favor of mimicking the factory-style, "traditional" high school experience.

But I've learned that my children deserve better than me forcing them to slog through boring textbooks just to say they've "covered" certain material (regardless of true interest or real learning) - even at the high school level. In fact, God expects me to continue honoring how He has uniquely designed each of them according to His purposes, and to listen to them and to His leading instead of going with current cultural norms by default. If that had meant never using a "science curriculum" again - if, instead, my daughter would have had "only" her previously-completed General Science course and then whatever (if anything) I might have compiled towards an additional credit or two from informal/"unschooling"-based activities - that would quite literally have been just fine. My responsibility is to my children and to God - not to status quo - and I have to trust that listening to them and to Him will bear fruit. In fact, it already has.