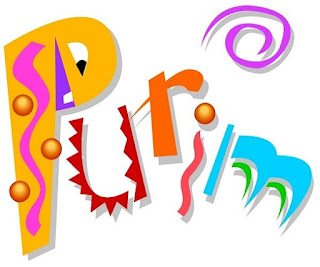 Last month I unexpectedly learned that I am ethnically Jewish. Though surprised, I am thrilled and look forward to exploring these roots further. I've also been reading the Bible differently than I did before and am excited to learn more about Jewish history, including the biblical feasts and other holidays.

To that end, I've noted for the first time in my life that today is Purim. This holiday is not a "feast day," but is extremely important in Jewish history, as it celebrates one of several times in history - in 356 BC, in this case - when Adonai saved the Jews from annihilation. The details of what occurred - a real series of events that happened to real people - are recorded in the Book of Esther, which I have, of course, read before. But I read it again last night, as is a traditional practice on the eve of Purim. And I also read some commentaries, one of which really struck a chord when the author explained how what happened was a real miracle even though God's name is not mentioned even once in the book:


...[T]he message of Purim is: There's nothing natural about nature. Random processes are really anything but, and nature is just G-d's way of managing the details without showing off. ...In reality, life is a constant dialog with G-d. Every little event is part of an interactive master plan that has its own goal and logic, yet responds to our every move, subtly adjusting a world of outcomes...

In recent years, I've regularly begun to refer to "random" circumstances as being "God-incidences." I make an intentional decision to think and speak in this way because I know that nothing - good or bad - occurs in this world unless Adonai allows it, for His purposes that we don't always understand (Romans 8.28). But I still lose sight of that reality far too often in far too many ways. So it was good to be reminded by re-reading Esther of the importance of choosing to believe He is behind and within every moment of every day, even when He is not named.

Of course, thinking of the events surrounding Purim inevitably brings to mind other times when my people have been persecuted and hunted down, the 20th century Holocaust being but the most recent significant example among many. That is depressing - and petrifying as well given the recent rise in anti-Semitism around the world and even among some who work within the United States Congress. I honestly don't want to think about something like that happening again, even though I know it might, perhaps even in my lifetime or that of my children. I would have said that six or two months ago, too. But now it's personal, not just principle.

Yet the main message of Purim is that God sustains His people. In fact, He sustained the Jews as a people even through the Holocaust, and ultimately used secular governmental bodies shortly thereafter to orchestrate their return to the Promised Land, contested as even that is today. And so He always will...because the Jews are His chosen people and He made a covenant with them/us. I don't have a theological handle on how He'll address that for Jews who do not accept Jesus/Yeshua as Messiah - I imagine that's something I'll feel led to dig into going forward - but I trust Him to keep His word in all things, including that covenant. It just takes conscious work to try seeing His orchestration day to day.

In terms of celebrating Purim - apparently, this is a rare occasion when Jews really let loose - I'm not doing more this year than marking the occasion for the first time on my personal calendar and reading through Esther. A local group of Messianic believers invited me to its celebration this evening, but I'm not able to attend, and I feel like I'm so new to even thinking as a Jew that it would be presumptuous to jump into such things just yet. But come next year, I'll do some pre-planning and figure out some ways to partake in more Purim traditions, whether on my own, with my family, or with others. In the meantime, it's on to thinking more consciously about Passover in a few weeks!