My Billboards in the Sky 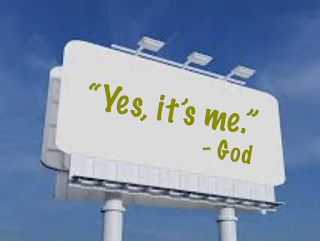 Biblically speaking, we know that God answers every single prayer (Isaiah 65.24). When we don't feel or see that a request has been answered as we'd hoped, we say He hasn't answered, but that's not true. Instead, we can rest assured that the Lord has decided - for our own good despite ourselves - to answer with "no" or "wait" instead of "yes." But make no mistake. He does hear and respond (appropriately) to every prayer. It's our job to look for confirmation of His answer, whatever it might be.

I'm not a Pollyanna about this - I dislike "wait" and "no" as much as anybody else - but I've been purposing to become more mindful in terms of seeing answers when they come. And just this past week, He delivered a (partial) "yes" in a rather miraculous way.

On January 5, my website, The Homeschool Resource Roadmap, experienced significant malfunction as I was attempting to begin a slew of needed updates. Needless to say, my stress level shot up, especially after spending a couple of hours on the phone with a rep from my hosting company, all to no avail. So after the rep "escalated" my case - meaning that I'd have to wait for emails from "Tier 2" techs - I asked members of my homeschool group, followers of my site's Facebook page, and personal friends to pray.

Over the next few days, I followed the email instructions of those "Tier 2" techs and spent hours more on the phone with the company, making no progress. I even contacted my web security firm lest the issues were related to their services, and I sought the advice of some local IT-expert friends as well as the members of a homeschool trade association group, one of whom went the extra mile by providing detailed insight via email. Finally, on January 8 - feeling at my wit's end - I joined a Wordpress group on Facebook and posted a question about my problem.

Almost immediately, Jonathan replied, and later that day he sent me a private message asking for more information. He even volunteered - without asking for a dime - to look at the site's backend to see what he could see. Because my site had been hacked in the fall and I'd become aware of the ransomeware problem, I was leery of that and politely demurred, hoping my "known" sources would come through.

But later that day, Jonathan messaged again, hoping to hear that my issues had been repaired. He asked more questions and suggested different tricks I might try, eventually devoting several hours - all without any compensation - helping me to troubleshoot. Along the way as we chit-chattted, he revealed that he is a young homeschool dad! And, when I went to "spy" on his Facebook page, I could see that he is a real person, and I also happened upon a picture of the day - not long ago - when he'd been baptized!

At that point, I felt a nudge within my spirit saying that, despite the risk, it would be okay to let him into the backend of the site - that he was God's answers to the prayers of many on my behalf. I told him that but admitted my concern about site security, and he recommended I allow him to look as an "editor," not an "administrator." So...I took a leap of faith and did!

We didn't come to any resolution that night despite Jonathan's efforts, so when I could barely keep my eyes open anymore, I deactivated his editor access and we agreed to try again the next morning. True to form, there he was bright and early the next day, raring to get back at it, again devoting several hours as I followed along with his suggestions.

Despite his optimism, I'd about given up all hope when he - against all odds - found a glitch, a compatibility problem between some of my files and the current version of Wordpress. And he discovered a fix, at least for that page - a simple format change I could easily make with one click. I exclaimed, "That's it? All this trouble because of that?" To which Jonathan humbly replied, "LOL, that's usually the case."

For several reasons - including its inability or unwillingness to help resolve my problem without my shelling out significantly more money than I've already paid them - I'd already decided to ditch my then-current web host as soon as I could. And, by that point, it had become clear that God had orchestrated events to guide me toward choosing Jonathan - and his business, All Unlimited Design - as a replacement. So I spent time that afternoon and the next day working with Jonathan on the multiple steps necessary to transfer my hosting to his concierge care.

And I originally thought that was the end of the story. However, the site began experiencing other glitches the next day - and Jonathan's idea for fixing file formatting didn't always work. I don't blame him, though; I am now basically convinced that there's a (Wordpress-related) techie cause beyond his control and also (more to the point) a specific-though-counterintuitive path God wants me to take with the site. I've actually had this idea in my head since The Roadmap was hacked last fall, but needed confirmation via this process of finding Jonathan.

Sometimes the "yes" answers God brings are subtle; that's why we must choose to keep our spiritual radar up when we've sought Him for something. However, there are times when He basically puts billboards in the sky,  even if He needs to put up a few to catch our attention. I believe the hack was one billboard, the weird site glitches another. And my "accidental" benefactor and all he's done to try to help on a human level is the biggest and clearest of all.

As to what that counterintuitive path is...I'm going to hold off on detailing that just yet. I'm feeling peace about it even though most will think I'm crazy, but I want to walk a ways - and keep an eye out for any other billboards - before I share more.

God is so awesome. He always looks out for our best even when we are to blind and stubborn to swe it. Glad God led you to Jonathan and he to you. Thank you for all that goes into this site.

Crying while I'm reading this. Thank you for sharing.