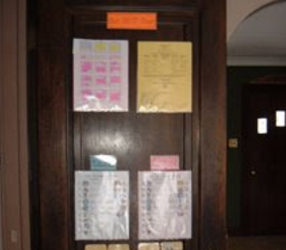 When we first started using Sue Patrick's Workbox System, we also introduced the DO-IT DOOR, our family's version of a chore chart.

For a couple of years before that, I'd thought that some kind of visible chore chart would be helpful to my children. But I didn't have a clear picture of how to put it together...until I read the workbox book.

Sue's ideas inspired me to develop a chore chart that was similarly visual and hands-on. So I brainstormed a list of morning and evening routines and chores, all of which my girls were already doing or could easily take on to be active family "teammates." I typed it up, plugged in clipart pictures my graphic artist husband supplied, and - in true workbox fashion! - affixed a velcro dot next to each task. 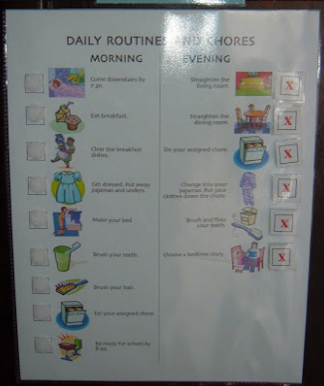 Each night after my children went to bed, I attached little laminated X's next to the chores and routines I expected them to do the next day, leaving blank anything that needn't be accomplished. Then as soon as their feet hit the kitchen floor - by 7:30, as that became the first "job" of the day - they removed the first X and proceeded through the morning list (Eat breakfast. Clear the breakfast dishes. Get dressed. Put away pajamas and unders. Make your bed. Brush your teeth. Brush your hair. Do your assigned chore.) all the way through to the last item - Be ready for bookwork by 8:45 - which effectively marked our transition over to the workboxes until lunch. And at the end of the day - sometime after dinner - they followed a similar pattern of removing plastic X's from the evening list: Straighten the living room. Straighten the dining room. Do your assigned chore. Change into your pajamas. Put your clothes down the chute. Brush and floss your teeth. Choose a bedtime story.

As you can see, directives to do some simple but helpful household tasks were intermingled with routines on both the morning and evening lists. For example, the evening list included assignments to straighten the living and dining rooms, two areas where toys often accumulated through the day. Similarly, there was a spot on each list that said, "Do your assigned chore," tasks which varied from day to day. Typical morning chores involved wiping out the bathroom sink and helping to load or unload the dishwasher. In the evening, chores included emptying litter boxes or taking out the garbage, and every Sunday night the girls tackled a "big clean" on their upstairs playroom. I simply attached a post-it note listing the day's assigned chores onto the bottom-right corner of the chart so the kids could breeze through the list even if my husband and I were otherwise occupied.

Just as the workboxes helped our official academic time to run much more smoothly, so, too, the Do-It Door - so named because the charts were affixed to a door in our kitchen, though we could have had something like a "Work-It Wall" if we didn't have the door - transformed how we managed mundane self-care and household jobs. The girls were actually excited to get through each list, yet they also did their work well because they knew they'd have to repeat anything that wasn't done diligently enough. They gained a huge sense of accomplishment via the simple task of removing the velcro markers from finished jobs, and they could also see their progress as more and more X's disappeared. My husband and I soon found that we rarely had to monitor the girls through the activities, because having the chart gave them an intrinsic sense of ownership. And they actually did more than they'd done prior to instituting the charts because the assigned chores that used to be hit-and-miss became normal expectations.

A lot of families institute something like this from the time their children are toddlers; I wish I'd done that, too. However, this was definitely a case of "better late than never," and it was well worth the time and effort to create the lists and train the girls to use them. As I said, I have Sue Patrick to thank for the motivation and inspiration. Her workbox idea transformed our home environment in many ways beyond formal academics.