How the Common Core Turned Me into a Pack Rat 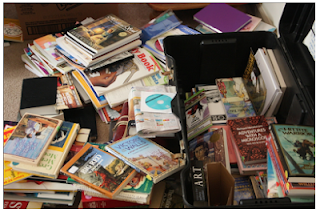 Anyone who knows me understands that I am not a pack rat by nature. Oh, I have plenty of "stuff," and I do keep some things for sentimental reasons. But I don't like clutter.

In fact, I enjoy being able to de-junk and keep things looking organized. And my penchant for doing so extended for a long time to homeschool curriculum, motivating me to quickly sell anything with which we'd finished rather than allow it to take up room on our bookshelves. As an added bonus, the money I earned through selling our used curriculum helped to fund my purchases of new material.

That summer, in the midst of an on-going research project and in light of several disturbing political developments, I became deeply convicted that I was no longer to sell anything of value in terms of children's education - not curriculum, not other educational resources, and not even children's literature. Instead, I decided to save and store everything I had worth keeping. And I determined to trust the Lord to provide for us financially for the purchase of new material in lieu of extra funds from the sale of old things. Beyond that, I also worked to find room in our budget to re-purchase copies of good material I'd sold in the past, all of which I'd pack up into totes as it arrived. I knew I might end up with rows of totes stacked floor-to-ceiling, but I didn't care.

And I have the common core standards initiative to "thank" for my about-face.

In my research, I learned that the publishers of about 50% of homeschool-related materials have chosen to remain independent of the common core, deciding not to change their resources for the sake of that misguided governmental overreach. Additionally, about 15% have not altered their content even though they have chosen to show "correlations" to the common core, and another 10% have "ancillary connections" via some outside vendors they use in their packaged curriculum programs. But that latter 25% has, in fact, acquiesced to the common core on some level. And another 25% of publishers homeschoolers might use has drunk the common core Kool-Aid, changing their materials - in whole or in part - for the express purpose of aligning with the initiative.

That looks positive, overall, for those of us wanting independence from the common core; we still appear to have plenty of unaligned or marginally connected options. However, a few companies that initially pledged their commitment to independence later chose to correlate. And I knew from my research that a couple of well-known, popular curriculum providers that are currently correlated are very likely destined to become aligned - changing content for the common core - as they make revisions to their materials for new editions. On the other hand, I have been assured by a number of publishers that they will simply close rather than compromise their principles for the common core, and I support and commend that stand. But, of course, if they do cease to exist, we homeschoolers will lose our access to their wonderful products, the same as if they'd changed to align.

I've spoken to some folks who believe that deep concern about the common core is unnecessary and even alarmist. They feel this is but the latest passing fad in "educational reform" that will probably fall to the wayside in due time, leaving intact plenty of educationally sound homeschool resources free of government interference. And I hope with all my heart they'll be proven right. But I've learned too much since 2013 about the history of "educational reform" - and pay way too much attention to current events - to embrace their cockeyed optimism. The Lord convicted me to do something and so do something I did.

Some have said, "Well, what if your girls don't homeschool?" And, of course, one or both may decide against homeschooling, a decision I will work very hard as a grandmother to respect even though I would be grieved for my grandchildren. However, the girls are currently extremely committed to home education - they see its benefits and understand God's call on parents to train up and raise their own children for Him - and we are already praying that their husbands - whoever God has in mind for each - will have the same convictions. In fact, each of my girls has indicated at this point that she will not consider marriage to a man who will not allow her to homeschool. And so I feel compelled to help them provide for that as I'm able.

Of course, it's possible they won't want to use what I'm saving - and, by God's grace, they will still have at least a few decent options beyond what I'll have collected. I'm perfectly fine with that. I just want to make sure they have something useful in a worst-case scenario. And even if other good resources are still available down the road, perhaps they will decide to go with what I've saved in order to be good stewards of their families' finances. Then my saved items will have served as a sort of homeschooling trousseau, and that will bless my heart.

Thus, I launched out on my mission. I made a list of good (still unaligned) materials I'd used in the past and then sold. I began to purchase replacement copies, and continued to do so until I'd "re-stocked" everything I wanted to have. And since Fall 2013, I stopped selling books after we finished them; instead, I made room in storage totes, selling only a few items that likely won't be useful in the future.

I also bought an extra copy of each consumable book in order to keep a "clean copy" available for future use - because, though I am committed to complying with copyright law, if the materials are not available years from now, making copies won't violate the law at that point. And I've saved all the children's literature we've had in the house - after parsing through it to eliminate twaddle - because, tragically, part of the common core agenda even involves making politically correct revisions to literature. Thus, the girls won't be able to count on original versions being available down the road.

I know all of this sounds to some as if I must be wearing a tinfoil hat while I write. Think what you will, but I can assure you I'm not paranoid. I am simply a realist. I certainly don't take becoming an educational resources pack rat lightly; it does go against my tendency to be minimalist and efficient and it looks "extreme" to those who don't take the time to understand the situation. But, frankly, I don't care. As I mentioned, my observations of the world around me have led me to conclude that I must err on the side of caution. Thus, I will risk one day being considered a silly curriculum hoarder over failing to provide quality, non-revisionist educational resources for my children to use with their children.