What is Legal Homeschooling...and Why Does It Matter? 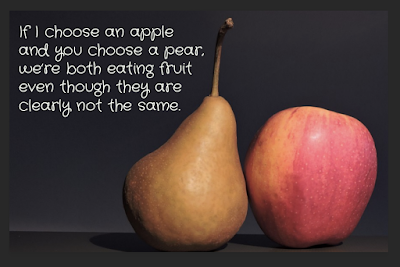 Choice is a good thing. And, in contrast to the sad state of affairs in many other countries, American parents currently have a plethora of options when it comes to how and where they'll see to it that their kids are educated. I fully support parental rights in this regard...but we cannot forget that with choice comes responsibility. In this case, the responsibility to speak truth.

Homeschooling was actually the norm in America up until the post-Civil War era. At that point, political "progressives" teamed up with captains of industry and academics such as Horace Mann and John Dewey and - for less than altruistic reasons, as described in Milton Gaither's Homeschool: An American History and John Taylor Gatto's magnum opus, The Underground History of American Education - essentially outlawed home-based education and severely limited the reach of private schools. Thankfully, choice eventually returned, first for conventional private schools and then - beginning in the 1970s - for those who wished to educate their kids at home. It took too long, but by 1993, every state had again acknowledged parents' legal right to homeschool.

And our choices have greatly expanded since then, such that I've been able to identify 16 different approaches of which parents might avail themselves. Each option has its own perks, challenges, and legal ramifications, and parents must carefully vet them all to determine which best matches their values and will most effectively meet their kids' needs. The problem is that many don't understand the important distinctions between the different options. And some persist in blurring the lines between them - especially when it comes to referring to some non-homeschooling options as homeschooling - even when they do know better.

With that in mind and after spending years trying to help parents understand the various approaches, I decided (with the help of my graphic artist husband) to create this infographic with its accompanying explanations, below. For the sake of full disclosure, I admit that I advocate (not arbitrarily, but when asked my opinion) for one particular approach - i.e., wholly independent parent-directed private home-based education (i.e., legal homeschooling) - but my goal here is not to put homeschooling on a pedestal or convince everyone to homeschool. Rather, I aim only to share the actual legal reality for each option, taking "feelings" and judgment out of the equation, to explain the actual facts about the different options as they stand today. In so doing, I hope to help parents understand the objective, legal distinctions between what is actually defined as homeschooling and what is not, so they can make well-informed decisions for their kids and understand what the choices they make really mean. 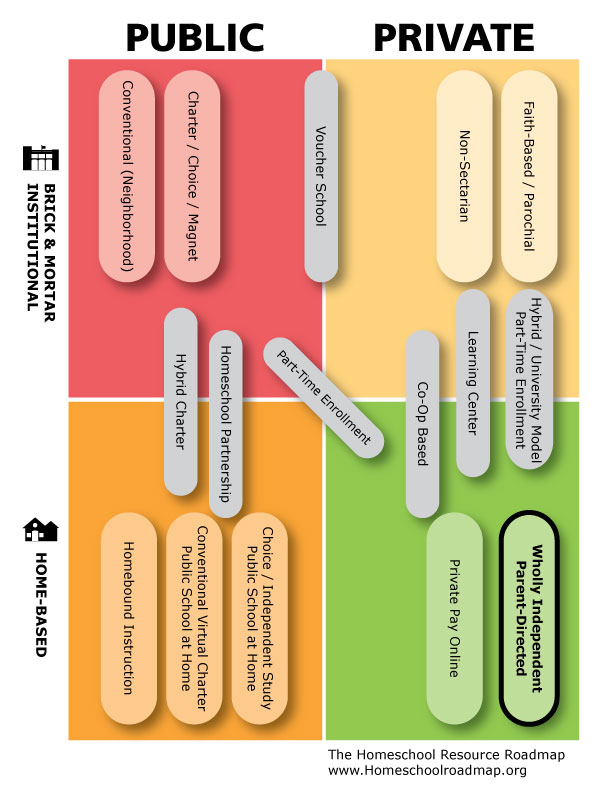 Download a PDF version of this chart HERE.
---
As you can see, the chart has four quadrants - just like a punnett square - based on where funding comes from (public or private) and an entity's base of operation (brick & mortar institutional - i.e., a physical building other than a child's home - or home-based). These two important factual realities, coupled with a parent's level of authority over day-to-day instruction, combine to designate the objective and legal nature of each educational option.

In addition to the infographic above, I've also created this summary chart of what I've just detailed, a PDF version of which is available HERE. 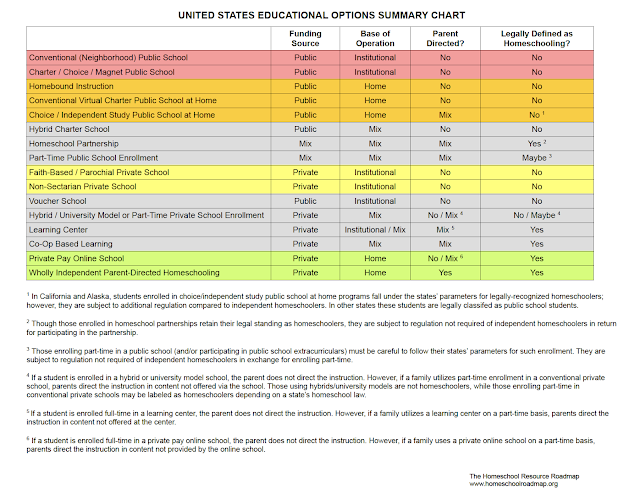 ---
I know some folks will take issue with my explanations, continuing to insist that they "feel" like homeschoolers even when current legal realities say otherwise. But the truth we must speak is still there, like it or not. Though both are fruit, a pear is simply not an apple and never can be, no matter how much we might wish it so; likewise, an educational option that isn't legally defined as homeschooling is not homeschooling, regardless of our "feelings." Simply put, state homeschool laws were written - and have not been altered very much over time - to reflect an educational option in which instruction is led directly by a child's parents from a base of operation in the home, paid for the parents' own privately-held income and assets. Some gray areas have developed over time which, perhaps, need to be addressed legislatively. However, until/unless that happens, we have to accept reality as it really is.

That doesn't mean, though, that the non-homeschooling options are somehow less valid. As mentioned above, I'm an advocate for wholly independent, parent-directed education, but I'm also an advocate for parental rights - as every homeschooling parent should be. And that means I support every parent's right to choose an educational path he or she deems best - as long as those parents tell the truth. Thus, if you've decided to send your kids to one sort or another of brick and mortar institutional school, embrace your choice with confidence. If you're involved in some of the gray area options that are currently defined as homeschooling, own what that means in terms of both strengths and challenges. And if you've enrolled your kids in either PSAH option or a hybrid/university model school, celebrate the truth about your decision rather than insisting that you're homeschooling when (under the law) you are not. Be a proud PSAHer. Be a rabid university model school parent. Go all-in for what you're really doing, not according to your feelings but according to factual, legal reality.

Why does this matter? Why can't people self-identify as they want? Well, first, that would be lying; a pear is not an apple. Second, the homeschool laws in every state came to us after very long, hard-fought battles just a few decades ago, and we homeschoolers realize that activist legislators could sweep them away in pretty short order if they wanted. We must keep the lines between what is actually homeschooling and other educational options as firmly drawn as possible - not to be on guard with other parents but, rather, to protect ourselves from overzealous bureaucrats, who have demonstrated that they will take advantage of blurred lines to try stealing freedom from homeschoolers. We must be ever-watchful of them.

It's unfortunate when that necessary vigilance feels like a slam on parents using non-homeschooling educational options, especially one of the "blurry" ones. That's not our intention. We really do want to support your parental rights as much as we fight to keep ours. But the current state of affairs means that we homeschoolers must insist that we all keep the fruit in distinct piles as much as possible. So, if you're using one of the educational options that is not legally defined as homeschooling, please be proud of and tell the truth about your real choice, and please try to understand our position as homeschoolers. When we're honest and hold fast to necessary distinctions, we all benefit.

Your website is terribly informative and your articles are wonderful.
use this link