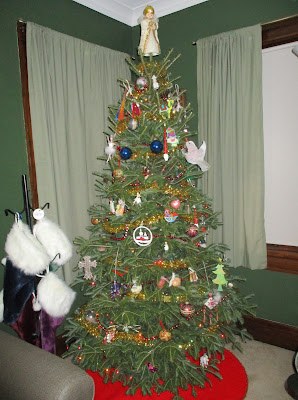 I wrote this piece for the Celebrate Kids email newsletter which ran on December 21, and have also archived it on my other blog, Tina's Take on Things. My thoughts on Christmas are currently "evolving" in ways that are likely to blow more than a few minds among those I know - I'll share more when I'm ready - but this reflection is one result of my musing.

Even though a short study of the details described in Luke 1 show us with certainty that Jesus was actually born in the fall – during the Jewish month of Tishrei, which corresponds to September/October on the Gregorian calendar – celebrating Jesus’ birth on December 25 first occurred in 336AD by the decree of the Roman emperor Constantine, who had claimed a conversion to Christianity. And a few years later, Pope Julius I declared that December 25 would be the official day of celebration within the Church. Purposely or not, this timeframe coincided with the Roman festival of Saturnalia, an Italian harvest celebration dedicated to the Roman god Saturn. Without thinking much of it, new Gentile converts to Christianity carried many practices common to Saturnalia into their Christmas celebrations, and that ancient syncretism is the root of our culture’s odd mix of secular and sacred at this time of year.

Nearly 1700 years later, it’s highly unlikely that these two threads will be unwoven any time soon. Those who want a secular Christmas – which is, of course, an amusing oxymoron since Christmas means “Christ’s mass” – must wrangle with nativity scenes, religious carols, and invitations to Christmas Eve church services. And folks who want Jesus to be the reason for the season are stuck with the conspicuous consumption and rowdy parties prevalent during Saturnalia, as well as more modern secular manifestations like reindeer, snowmen, and fruitcake.

Whatever our personal preferences, we can each choose to let this unavoidable tension make us angry and combative…or not. The cultural reality is what it is, and it’s not going to change. But how we respond is up to each of us, individually. It’s a choice.

And knowing history can help us to choose peace and grace. In truth, it’s inaccurate to say that secularism has “ruined” Christmas because, in reality, early Christians co-opted and overtook what was originally a secular holiday. But – just as He promised – the life, death, and resurrection of Jesus has been the single-most influential set of events in human history, and its effects have rippled far and wide across time and around the globe. Thus, there is no real “Christmas war.” December 25 – and the days and weeks surrounding it on either side – are not just secular and not only sacred. This is truly a case of both-and, not either-or.

So, think through your worldview perspective in a very conscious way, and then intentionally choose which cultural traditions you want to employ to support your values. Do teach them to your children “when you sit in your house and when you walk along the road, when you lie down and when you get up” (Deuteronomy 6.7). But then choose to ignore – without malice – other traditions. Your other-than-Christian neighbor is celebrating in the tradition of the end-of-year pagan Saturnalia festival. You’re wanting to mark Jesus’ nativity, albeit about three months too late. Pray, of course, for your neighbor to come to Christ, but give grace no matter what, knowing that, in reality, you’re both participating in long-held cultural traditions and no one has “stolen” anything from anyone else.

You can stress and fret, or you can enjoy a merry Christmas as you see fit. It’s your choice.