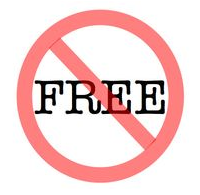 But, then again, nothing worth doing ever is.

And - contrary to the myth perpetuated by its proponents - neither is public school.

Once parents began a few years ago to see the effects of common core, more and more who never previously considered homeschooling have been taking the leap into the home learning life. Thus, my long-time homeschooling friends and I have been fielding how-to questions almost daily, one of the most common of which is, "How can I homeschool for free?"

I know why they ask.

For some reason, despite years of writing checks to pay for school supplies, back-to-school clothes, registration fees, parking permits, activity fees, hot lunches, lab fees, yearbooks, instrument rental fees, sports equipment, etc. - in fact, in 2013 the average family spent more than $630 on school-related expenses...before walking in for the first day of class and getting socked with the various fees ladled out by the schools themselves -  they're still under the impression that the public/government schools are free. And they also hear of absurd notions like "homeschool vouchers," which promise government money but fail to honestly acknowledge the heavy price involved in the scheme - i.e., a loss of privacy, autonomy, and academic freedom. As a result, they unconsciously feel entitled to continued "free education," balking at the notion of having to pay. And, against the clear evidence that they have, indeed, found ways to pay for all the expenses associated with attending government schools, they claim to have "no money" for homeschooling.

To be fair, I know from my work since March 2013 to develop The Homeschool Resource Roadmap that some homeschool resources are exorbitantly expensive, such that even private school tuition might be cheaper in some cases. And, while I believe those providers have every right to charge what people are willing to pay, I can also understand the sticker-shock if a wannabe homeschooler comes to believe that a pricey program is her only option. That's not true, of course, but I've (sadly) seen quite a few advertisements for the "Cadillac" options claiming that more reasonably-priced materials are "clunkers." So, if a potential homeschool parent believes that lie, she will understandably think homeschooling is out of her reach.

But the truth - as is often the case - exists between the extremes.

On the one hand, it's hard to give an average because each family is unique. Despite stereotypes, there is no such thing as an "average" home-educating family, and our financial circumstances vary just as much as anything else about us. Some can afford and don't bat an eyelash at the Cadillac resources, even for multiple kids. One needn't spend thousands per child per year, but if that's some families' prerogative, so be it.

Others need to be incredibly frugal in order to manage. So they create their own material and learn to make good use of libraries and (well-vetted) internet sources. And kids in those families do very well when their moms put forth serious effort to compile and organize the low-cost material. In other words, what they lack in funds they make up for in time. But, of course, that is a "cost" as well; it's never - not even for "unschoolers" - a matter of simply being granted a pile of free resources and tossing them in front of the children on a Monday morning.

Realistically, though, most of us are somewhere in the middle, as are most folks considering homeschooling. So if we're honest with ourselves, we do have money with which to homeschool, and it's not even all that hard to find.

In terms of curriculum, most sources suggest that planning for about $500 per child per year is realistic. And based on what I've seen via my database research, I think that's a fair estimate. Of course, some years will cost more...but some will be less. And, as with any endeavor, initial start-up costs will very likely be higher than in subsequent years. But, on the other hand, once one purchases material for an older child, it can often be used again for younger siblings, thereby lowering annual costs going forward. So, overall, I think that average estimate is an honest starting figure.

But where will it come from? Well, remember that if you're homeschooling, you're not paying for all the school fees, which in many cases add up to hundreds of dollars per child per year; this parent, for example, discovered he owed almost $600 in start-up school fees for just one child, and that is not unusual. So add up the cost of all the expenses you'd incur from the school - registration fees, parking permits, activity fees, hot lunches, lab fees, yearbooks, instrument rental fees, sports equipment - and set that money aside for homeschooling instead. And then consider the back-to-school costs you'll no longer have. Yes, homeschooled kids need school supplies and all children need new clothing from time to time as they grow. But homeschool families don't need the specialized, expensive supplies the schools often demand, and chances are good that you already have many necessities - pencils, crayons, markers, paper - on hand. And you certainly won't need to purchase six designer outfits and hundred-dollar sneakers in hopes of helping your child to "fit in." In fact, you likely won't need to buy any clothes at all in August; instead, you can purchase items throughout the year to meet your children's actual, physical needs, and use the money formerly set aside for "back-to-school" clothes on curriculum and other basic homeschooling needs.

Of course, homeschoolers incur costs beyond actual curriculum. For example, it's a good idea - for kids and parents alike - to join a homeschool association, most of which require a membership fee. And, whether with members of such a group or as an individual family, there will be field trips and other outings for which to plan. Similarly, opportunities for special classes and community-based sports, music, or drama will present themselves throughout the year. But it's possible to find a low-cost support group (for example, mine only costs $20 per year), and most trips and extras are just a few dollars per person. Thus, all of that can - for those willing to commit - be built into nearly any family budget with just a few tweaks.

The key is commitment. Honestly, anyone can homeschool, regardless of a family's socio-economic standing or anything else; history and the data bear that out. But it takes commitment. In terms of finances, it doesn't need to cost a mint. But, on the other hand, it's unrealistic and immature to expect it to be free - and don't even get me started on that notion of "government-sponsored homeschooling" (i.e., via vouchers or the misconception that public-school-at-home is the same as homeschooling). The fact of the matter is that educational materials - regardless of what approach one uses - cost money. And, as 1 Timothy 5.18 tells us, "the worker is worthy of his wages." So one must either invest time instead of money, as explained above, or be willing to pay for someone else's expertise and time.

Do remember, though, that much of the expense is really just a transfer of cost - choosing to move what one was paying in school-related expenses over to home education - and the rest is simply choosing to make small adjustments to one's budget throughout the course of a year to accommodate ancillary costs. If curriculum (around $500) plus everything else (maybe up to another $500) averages out to about $1,000 per year per child - which is still just one-fifth of the lowest average private school tuition - and you use what was budgeted for back-to-school expenses on the curriculum, can you find what amounts to just $42 a month to cover the rest...for the sake of your child's well-being?

If you want to, you can.