Why I Eschew Halloween 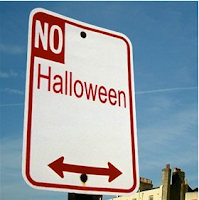 Halloween was an unquestioned annual event growing up in my secular, suburban family. My brother and I donned one costume or another - mostly of the store-bought plastic variety and never the least bit creepy...both because that was never our preference and because heavy Halloween gore wasn't nearly as prevalent or popular at the time as it is now. And then, since trick-or-treating always occurred on the nearest Sunday afternoon to Halloween itself, we meandered the neighborhood unsupervised, knocking on doors and receiving more candy in three hours than any one child could reasonably eat in a year. When we moved to the country when I was 11, trick-or-treating ceased for us simply because there were no neighbors. But we happily participated in Halloween-related activities at school.

However, shortly after I chose as a college freshman to follow Christ, I began questioning the general idea of Halloween. I heard some Christian speakers proclaim it was a satanic day and, therefore, should be shunned or, perhaps, even feared by believers. And on one level, that made sense - I certainly didn't want to participate in anything that glorifies the devil. But the argument also bothered me a bit because - though I knew satanists had, indeed, co-opted the original Celtic holiday that has morphed into Halloween - I wondered what it said about Christ-followers' faith in His power to overcome evil if we spent one night a year cowering in our darkened living rooms to avoid candy seekers. And so early in our marriage, my husband and I compromised by sometimes doing nothing and sometimes handing out treats along with tracts meant to interest children in the story of Jesus. I figured the vast majority of tracts were tossed with the candy wrappers, but at least I could say I had "tried."

Of course, once we were blessed with the births of our daughters, our esoteric ponderings about Halloween mingled with queries from "concerned" friends and relatives, Christian and otherwise: But don't you want to see them all dolled up as bunnies or princesses? It's all just good, clean fun. Don't you think they'll feel deprived? Even so, though, the idea of "celebrating" Halloween just didn't sit right with us so we basically ignored it when the girls were infants.

Then, the year they were two and three, my husband had something going on that night. I can't remember now if he was in Trinidad or had a work commitment, but I clearly recall knowing I didn't want to sit at home with my little girls wondering why our doorbell was suddenly ringing frequently and why I was ignoring it. Nor did I want to hand out candy because, in all likelihood, a good proportion of the costumes would terrify my toddlers. So I opted to take them to IHOP for a special "girls' night out," planning it so trick-or-treating hours would be nearly over when we returned home.

Thankfully, the restaurant had no overt Halloween decorations, but I still prepared for the inevitable questions: Where are your costumes? Why aren't you out trick-or-treating?

Instead, God sent us confirmation - in the form of a sweet, unassuming waitress who reminded me of my equally sweet high school band director - that He does not want us participating in the event. Because, rather than ask us why we weren't joining in the "fun," she took one look at us and said, "Oh, I think you are so smart to not let your little girls get mixed up with all that Halloween stuff. You will be so much better off if you steer clear of it. God will bless you for it." And then she lavished extra service on us during our meal simply to bless our time there.

Since then, we've gone to IHOP on October 31 every year. Yes, it gets us out of the house to avoid the doorbell-ringers. But, more importantly, it's simply become a particular family tradition we look forward to every year. And the girls truly never felt the least bit left out or deprived. In fact, they got creeped out by the gross costuming and the general idea of the day and knew full well that they received plenty of treats throughout the year. Besides that, they dressed up to use their imaginations almost every day; they didn't need a particular calendar date to give them permission for that.

But how - other than the advice of a pancake waitress - do we really justify our choice? Well, there still remains the spiritual dimension of things, which is very strong and cannot be ignored. Fact is, satanists have co-opted Halloween and engage in some pretty horrific practices at this time of year with the explicit goal of honoring satan. And, while I'm not the least bit afraid of him - because far greater is He who is in me than he who is in the world (1 John 4.4) - it doesn't seem right for us to make a special point of even subtly joining in with something that has been purposefully marked off as a day to celebrate the devil.

However, even removing for the time being that valid defense, we have other reasons. First of all, it truly didn't interest the girls. They talked with friends who marked the occasion, but never once asked if we could join in. Second, a lot of the activities associated with the day - both in modern practice and in regards to the holiday's history - scared and bothered them. So, since there's no reason an American child "has to" participate in Halloween, why would I require my children to do so just because other kids do? And, third, we are far from "fun-starved" and regularly find oodles of other, baggage-free ways to have a good time.

Those answers more than satisfy us. But I realized a few years ago that there is another, broader reason that may appease those unconvinced about the spiritual connotations and unsure about the validity of our personal preferences. Simply put, Halloween is not part of my cultural heritage and, therefore, doesn't need to be a part of our family traditions.

How can I say that? After all, Halloween in America is a multi-million (probably billion) dollar industry, and I'm definitely an American - and one who grew up with the holiday in her childhood home, to boot.

But let's take the day back to its roots - back to the Celtic Pagans who originally celebrated the end of the harvest season in what has since become Halloween. In fact, Halloween and the related Samhain are still recognized as highly significant events by modern-day adherents of Paganism and Wicca. But I don't practice those religions; therefore, Halloween is not part of my culture.

Understand that I do not use the word Pagan in a pejorative sense. As a Christ-follower, I do wish for followers of Paganism and Wicca (as well as others) to find their ways to the One whom the Bible says is the way to God (John 14.6), but I use the term to simply refer to the religions that are as living among certain peoples now as they were two and three thousand years ago in northern Europe. Pagans and Wiccans worship creation itself and, from what I understand, have a pretty deep sense of religious ritual at this time of year. And, though modern commercialized Halloween traditions have surely altered the original intent for the general population, the fact remains that the day is, at root, a spiritual event for religions to which I do not belong. Therefore, I don't celebrate it anymore than I - not being a Muslim - mark Ramadan or - not being a Hindu - recognize Diwali. Nor would I expect a Buddhist to celebrate Christmas or a Taoist to participate in Easter traditions.

It doesn't matter to me that very few Americans know the history of the celebration - or even that, among those who do, still fewer care. The simple fact of the matter is that I know what it is and isn't - an event not connected in any way to Jesus. And, therefore, God holds me - and, by extension, my family - accountable to steer clear of even its modern variations.

That said, I know a lot of solid Christ-followers who join in the "festivities" in one way or another. And it's certainly not my intent - nor is it my position - to judge whether or not they are doing what is pleasing to the Lord. I would suggest, though, that - as with all of life - a professing Christian not operate on "automatic pilot" in terms of Halloween, simply going along to get along or because it's what has always been done in one's family or among one's friends. Instead, take time to research what the day is really about - historically and currently - and ask God to clearly reveal what path you should take to bring Him glory on October 31 - the same as He asks of us the other 364 days of the year.