"Going to Church" Isn't the Only Way 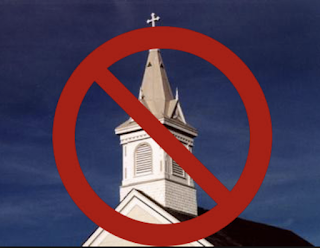 I've been thinking about Hebrews 10.25 a lot lately. The verse says, "Let us not neglect meeting together, as some have made a habit, but let us encourage one another, and all the more as you see the Day approaching."

Our society's common default interpretation of this verse is that we have to "go to church" in order to obey it. But - while any who know me also know that I faithfully attend services at my church (and regularly serve there as well - so I don't say this to get out of going) - that's not what the verse means. The previous verse says, "...Let us consider how to spur one another on to love and good deeds," and we have to look at the passage in context to correctly interpret it. It's not about "going to church," for several reasons.

First, the phrase "going to church" is an unfortunate cultural construct that has led people to believe they are "holier" than others for going to a building we call a church on a regular basis. But, biblically speaking, "going to church" isn't really a thing because - in reality - we (believers in Jesus) are the church (1 Corinthians 12, Romans 12). "The church" refers to people, not any sort of building. So, though we might show up every week to a designated building and follow the accepted norms of a "worship service," it's entirely possible that we could merely go through accepted motions. Being in a designated building doesn't come close to guaranteeing that anything spiritually significant is happening within any person who's there. We don't need a special building to obey Hebrews 10.25.

Second, Jesus said He is present where even just two or three gather (Matthew 18.20) - and, in fact, God is with and within each believer individually because each of us is permanently in-dwelt by the Holy Spirit when we accept Christ's gift of salvation. We don't need large groups sitting dutifully in rows facing a platform or an altar to obey Hebrews 10.25.

Additionally, though Jesus taught in synagogues and went to the Temple as well, nothing in the New Testament says that gathering in formalized settings is "better" than informal meetings. In fact, Jesus taught on hillsides, in "upper rooms" of inns, in gardens, etc., too. We don't need formal "services" to obey Hebrews 10.25.

And, though Jesus taught formally (i.e., lecture-style) at times - i.e., in the synagogues and to large groups on hillsides - He also taught, counseled, and healed among small groups and with individuals, in both semi-organized and spontaneous situations. He never said His formal, large-group gatherings were spiritually better than the one-on-one encounters or that smaller-scale connections were okay as long as people first had gatherings en masse. Indeed, it can easily be argued that the most spiritually significant moments happened as the Lord interacted with people on an individual basis via simple relationship (see Mark 5.25-34 as just one example). We don't need lectures we call sermons to obey Hebrews 10.25.

Finally, we know from the Book of Acts that the early believers began meeting together on a regular basis, and, though it's not unreasonable to suggest that those coming out of Judaism perhaps modeled at least some of those gatherings on services they knew from their synagogues, nothing in the New Testament says gatherings had to look like that. And, honestly, we really don't know for sure. All we know is that the disciples "devoted themselves to the apostles’ teaching and to the fellowship, to the breaking of bread and to prayer" (Acts 2.42). But we cannot extrapolate from that description that the teaching had to be a lecture and that a gathering had to be 55 minutes long and occur once or maybe twice a week; in fact, if they were authentically fellowshipping as the verse suggests and eating together, the gatherings probably lasted several hours at a time and were quite relational and not formalized. So if we presume that "meeting together" among early believers had to look like "going to church" today, we are applying a bad hermeneutic.

In reality, believers can fully and deeply obey Hebrews 10.24-25 in many ways - possibly including but not limited to the formal "church services" to which we've become accustomed. In fact, "going to church" might be a hindrance to obeying the passage for some people and/or in some seasons of life. So let's not presume that people who "go to church" are "more spiritual" than professing believers who may not. And let's not presume that there's only one way to obey the command to not give up meeting together. "Meeting together" as intended by the author of Hebrews can happen on any day of the week, at any hour and in any location, and with any number of people. I can encourage a sister in Christ over a cup of coffee at a local cafe on Monday, and my husband and I can study the Word together at home on Tuesday. A friend can hold me accountable over the phone on Wednesday and I can meet with a small group of fellow homeschooling moms in a park on Thursday while our kids swing and climb. I can even develop deep friendships with like-minded believers in an online group that is "open" 24/7/365.

The Bible doesn't say that those sorts of gatherings are fine and dandy as long as we're also "going to church." That's what culture says, but culture is not Scripture. In reality, any time we gather with other believers to encourage each other in our faith walks,  we are obeying Hebrews 10.24-25 - with or without "going to church" thrown into the mix. And the truth is that our "non-church" gatherings very often contribute to far deeper spiritual growth than showing up "to church" on Sunday morning. "Meeting together" is about a lot more than checking off the "going to church" box each week.