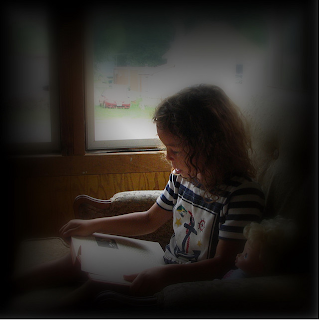 If I had a dollar for all the pleas I've heard from young homeschool moms at their wits' end because their four-, five-, or six-year olds weren't yet reading, I'd be able to thoroughly fund my daughters' curriculum needs each year...and then some.

I see such entreaties almost daily, from moms desperate to figure out why their newly-minted five-year olds cannot grasp beginning phonics. They all believe that either their current phonics program might be inadequate or that their children must have learning disabilities.

And I always long to reach through the computer screen, grasp the mom by the shoulders, look her in the eye, and shout, "Put down the curriculum and stop believing the lie!"

That would be the lie of the institutional school system, which has our society now believing that formal 4K classes are an academic necessity (with the push for 3K and even 2K (!) already knocking at the door), that all children must accomplish the same cognitive tasks at the same time, and that every child must learn to read at the age of five (if not before) or be doomed to a life of illiteracy.

The truth of the matter is that each individual child has been created by God as a unique, one-of-a-kind miracle. Which means, to put it bluntly, that it's nothing short of immoral to expect all children to learn the same things at the same time, at the same pace, in the same way. And, besides that, it's unscientific! Yes, some children are developmentally ready to learn to read at five. Heck, some are ready at three or even two. But some perfectly healthy children are simply not ready until six or seven or even later in some cases. Thus, it's both foolish and wrong to expect all children to read by age five and to negatively label those who are simply wired to grasp the skill a little later.

Sadly (with the exception of some very dedicated individual teachers here and there), we cannot expect the institutional schools to really take individual needs into consideration. After all, the very nature of the system is to "standardize" its young clientele. But we can get past that lie in home education - and we owe it to our children (and the God who took such care in crafting each one uniquely) to do so.

Yes, some children actually do have learning difficulties that hinder their ability to learn to decode and comprehend fluently. However, it's unfair and patently ridiculous to make such a diagnosis in a five-year old. If a child shows no interest or demonstrates extremely limited progress by the age of eight, a more formal evaluation (ideally done by a professional in private practice, not someone associated with the government schools) is probably warranted. But in most cases, a child who has no interest or aptitude at age five will seem to "blossom overnight" a year or two later...if we keep the pressure off and accept each child's individuality.

Conversely, if we push before a child is ready, we won't make any progress, and we'll be extremely frustrated. Worse than that, we'll stress and frustrate the child for no good reason, which could set her up for a lifelong aversion to the very activity we felt compelled to push on her.

Most kids will require formal instruction in learning to read so, by all means, do your research and choose a solid, phonics-based approach. Have it on hand. And then just wait...and watch. If your child is destined to be an early reader, he'll likely start picking things up "by osmosis," at which point you can pull out your materials and give them a try. Otherwise, feel free to try your chosen program after your child turns five (or even later) - there is no need to even attempt it before then unless he initiates! - and see how it goes. If he takes to it, keep going. But, if there is any resistance or difficulty, simply put it away for a few months. And then wait...and watch some more. Eventually, you will see obvious readiness signs - he'll begin asking what words say, he'll "read" the text of books he's memorized, he'll directly ask you to teach him to read - and/or he'll suddenly take to the phonics book in a way he never did before. And then you'll know he's ready.

By all means, create a literacy-friendly environment for your children: surround them with books to explore; introduce them to letters and sounds in fun, informal ways; and (most importantly) read, read, read to them (multiple times every day from birth on). But, beyond that, the key is to simply stop believing the lie and go forward from there.