Dancing to Our Own Music 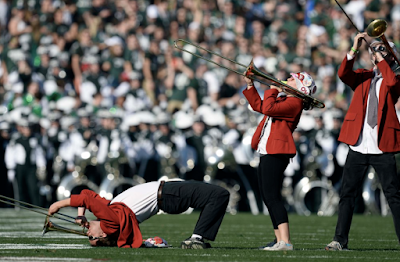 This "back-to-school" season is always an odd time of year for me. For one thing, of course, I homeschool and so it's really "not-back-to-school" time for my kids. But we're also different than many of our home-educating friends because most of them choose to follow a conventional calendar, taking a three-month summer break every year and starting back to academics - beginning a "new school year" - at roughly the same time as families who send their kids to institutional schools.

Once upon a time, I did follow a more conventional schedule, in part because I babysat for teachers' kids for many years. However, as I understood more about child development, learning theory, and the history of American schooling, I realized that our culture's current norms weren't actually set with kids' holistic best interests in mind. And I knew that, as a home educator, I have the freedom to do better, so I took time to research my options and develop a plan that works for us.

The short answer to our approach is that our academics go year-round, a practice more and more homeschoolers have also adopted. But, of course, no two year-round families are the same.

In our case, I started with the premise that there's nothing magical about "starting a new year" in the fall. In fact, before the advent of factory-style schooling near the turn of the 20th century, rural kids who attended schools away from home only did so in summer and winter - in spring and fall, they were needed to help with planting and harvesting, respectively - and urban kids essentially attended year-round without clear start and end dates, in order to keep them "safe" while their parents toiled long hours in factories. The idea of a long summer break eventually took root in cities to combat stifling temperatures in large, non-air conditioned urban school buildings, and with the advent of compulsory school attendance laws, rural schools were more or less forced to go along. It seems that the idea of a "new year" starting in September stems merely from wanting to start fresh after that long break during the summer months.

So it's become a cultural norm. But if one doesn't take a long summer vacation, the norm is irrelevant. I didn't feel the need to do what "everyone else" does, and couldn't think of any other reason to say our "new year" starts when the schools' do. In fact, other countries do it differently to this day. For example, a "new year" starts in April for Japanese students, March for those in South Korea, and in January for kids in Australia, Brazil, and Nigeria. Of course, going year-round is ultimately like a circle - it has no beginning or end - and I considered various options, including starting on October 15, the deadline in my state for filing our annual homeschool notification form, or with Rosh Hashanah as I've come to appreciate the Jewish roots of the Christian faith; in fact, if I were choosing now, I probably would begin at the time of Rosh Hashanah. But when I was making this decision, I ultimately chose to align our "school calendar" to the regular Gregorian calendar based purely on logic - why have two "new year" dates when one will do? - and so our family's "school year" runs January to December.

When the girls were younger, I followed a "sabbath schooling" approach. That is, we focused on "bookwork" (i.e., formal academics) for six weeks at a time and then took off for one week. During our time away from the books, we rested and took extra outings, and I made time to plan for the next six-week segment. We followed this general pattern from January through the end of June, tweaking if necessary, and then took our "long" mid-year break in July - to accommodate vacation Bible camps and an annual family lake vacation - before starting up with the 6-1 pattern at the beginning of August. We also took a year-end break for about three weeks in December to enjoy the holidays.

As the girls started "high school," I re-evaluated and determined that following a 7-1 or 8-1 schedule - seven or eight weeks on, followed by one off - along with the same mid-year and year-end breaks, was more suitable, and we've been doing that ever since. Following this routine, we've usually tallied about 200 "official academic" days per year, though, of course, there is plenty of learning going on over the weekends and during our weeks off as well.

A lot of people think I'm the "mean mom" for organizing our family schedule like this. They're envious of the one-week breaks we take through the year, but they wonder if my kids miss out on "summer fun." I haven't found this to be the case, though, for a few of reasons. First, our academic work never takes all day; even now with the girls in "high school," we typically finish by 1:30 or 2:00, leaving plenty of time for afternoon and evening activities. Second, I can always adapt when friends plan a morning or day-long activity; in fact, thinking outside the box of the conventional school calendar makes doing so far less stressful. Third, taking a longer break in the month of July makes plenty of room for the typical summer exploits - i.e., summer camp. In fact, the girls are usually more than ready to get back to our usual routine by the end of July.

So as most kids - schooled and home-educated alike - are gearing up to "start back" at various times over the next few weeks, we're already a couple of weeks into the fourth of five academic "units" we have each year, and I'm planning some fun fall activities for my kids during our next sabbath week at the beginning of October. We'll still recognize "not-back-to-school" day here - the day schooled kids in our city return to class in a couple of weeks - by taking a one-day break from academics to spend the whole day out and about in the community. But other than that one nod to the conventional school calendar, I'm happy as a clam to dance to our own, unique scheduling music.
*****
Photo Credit: USA Today College