Biography of a Marriage 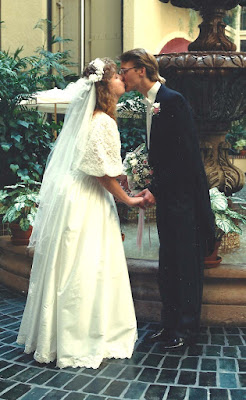 Yesterday was my wedding anniversary. And a very significant one at that.

I normally don't talk numbers. The fact is, I don't like to acknowledge my age because I don't want to seem "old." And if I mention how long I've been married, that dates me, enabling "people" to closely estimate my age. Maybe folks already know, more or less. But there's something in my psyche that prefers not making it obvious.

However, yesterday was a milestone and so I decided to swallow my pride...in order to express appropriate pride in a major accomplishment: a 30-year (!) wedding anniversary. I know that's a big deal, particularly in this day and age of serial monogamy. I also know several people who'd dearly love to celebrate a 30th anniversary with their one-and-only, but can't because a spouse was lost to an accident or sickness far too soon. So having 30 years together with - to paraphrase Scripture - the husband of my youth is truly cause for celebration.

Our celebration yesterday was actually rather quiet and subdued because of our current season of life. You see, unlike most others who can mark 30 years of marriage, we aren't yet empty-nesters; our kids are still home so we couldn't schedule a "big trip" for just the two of us. And our day-to-day lives are quite busy - sometimes too busy! - so we didn't think ahead enough to organize a party or a vow renewal ceremony. But, as I told my husband, I'm okay with that. Just as faithfully walking the road of marriage together counts more than the hullabaloo of a wedding day, so, too, acknowledging a milestone in simple ways in the midst of real life is more important to me than disrupting everything else for the sake of an "event." In a few years - maybe at 35 - we anticipate having the opportunity to make some sort of splash to celebrate, and that will be a blast when the time is right.

As to the biography of a 30-year marriage, it would be impossible to share every significant event and story without writing a book. Here, though, is a quick list of some memorable highlights:


As we marked the occasion of our anniversary on Facebook yesterday - because, of course, nothing is real these days unless it appears on social media! - our news feeds were filled with dozens and dozens of well-wishes from friends and colleagues who've known us over the past 30+ years, as well as family members who knew us before Jeff and I ever met each other. The sweet prevailing sentiment was a wish that we'll have 30 more years - or maybe even more. To which I can only say, "Let it be so, Lord. Let it be so."

Thank you for sharing your family adventure with us... We do love you as if you are our neighbor or if we were sharing the same pew at church. This brought depth to what Jeff does , every time he "leaves" you :) As for your age... You are the same age as my Son-in-law...and you do not get to feel old, because I am not ! <3

I remember being one of those guys praying for you. While it was sad to lose Jeff from our Bachelors Till the Rapture (BTR) group gaining you you as a sister and a friend during college was worth it. My your next thirty years together be more blessed than your first.

Yes, the first significant spiritual event in my life was something I didn't even know about till much later and was orchestrated by a group of bachelor-wannabes! :) But prayer clearly works! I think Steve remained single but it worked out better for you and Putz. :) I'm so glad we've reconnected recently; hope that includes a real-life get-together soon.

Happy anniversary! What a beautiful story of true commitment. Here's to the next 30!